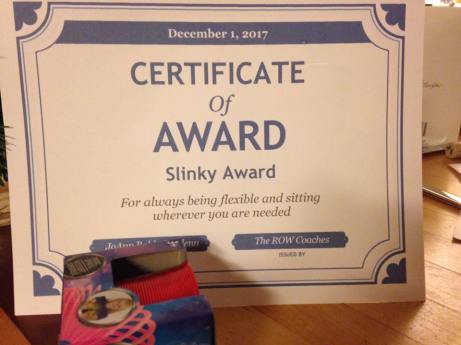 When I was 12 or 13, I wanted a softball mitt of my own for my birthday. As a former college baseball player and Little League baseball coach, my dad had raised my sister and I to play catch with footballs, baseballs and softballs–which meant that I ended up with a strong arm and decent accuracy–using his old mitts. However, during those formative childhood summers, when I would have needed to play on softball leagues and do more than throw a ball (like learning to be a team player or how to bat), I was up at the family Cottage on Lake Charlevoix, playing in, on, and around the water. That birthday, when I asked for a grown-up baseball glove, my parents gave me my first set of grown-up golf clubs instead. I was a little perplexed, because I assumed they were going to support my going out for my school’s softball team in the spring and buy me a glove. However, when pressed, they responded that golfing was “something you can do for the rest of your life.”

They were right. I have now played golf for nearly 40 years–longer if you include the golf course my dad set up for us in our back yard when we were kids, where he used tuna fish cans as the holes and we played with these adorable clubs. We played as a family during those summers at the Cottage–including with my grandparents–at a wonderful 9 hole course less than 2 miles from the Cottage called Ye Nyne Olde Holes. I played in high school on my school’s golf team and lettered. I played when I lived in Los Angeles. Terry and I have played regularly in Chicago, New Orleans and in the Upper Peninsula. As long as I’m able, I suspect I will golf.

A week ago Friday was the last day of our first semester (and what a semester it was!!!!) as well as a Professional Development Day. I generally dislike these days and find them boring or at the very least, I am ambivalent. However, one of our sessions surprised me. I’ve always thought of learning styles in a very two dimensional manner–either Auditory (using voices and ears as the primary mode of learning) or Visual (remembering what is seen). While I like to listen to podcasts and lectures and engage in discussions, which is more auditory, I thought I would simply rate higher as a visual learner. I was always teased growing up as being ‘book smart’ and a good academic student, and so didn’t really see another layer as an option. I had never factored in another dimension, the Kinesthetic/Tactile learning style.

Our staff was grouped together in to the three different learning styles and while there were about 12 people in the Auditory group and over 20 in the Visual, there were only 4 of us in the Kinesthetic/Tactile group. Each group made a list of our similarities and challenges and then presented to the rest of the staff. One of our groups ‘tells’ was that we all like to doodle and use objects like stress balls to help us focus. When we presented, all 4 of us had a wrapper or something in one of our hands that we were playing with. It was definitely noticeable. Of the four, one was a Physical Education teacher; another an English teacher who received her undergraduate degree in Musical Theater and was a dancer growing up; a third was our Theater instructor; and then there was me–a Civics/History teacher.

It was truly an ah-hah moment. I have both undergraduate and graduate degrees that are studious in nature (history, political science, English), I love to read and watch movies,  and enjoy listening to podcasts or books on CD when traveling long distances. Visual and Auditory learning. However, when I reflected on my learning, I realized that there is truly another dimension that I need to own. All of those academic degrees? They required hands-on experience (student teaching and internships) as well as the traditional testing. If I am sitting still, I am doing something with my hands (why I still prefer a physical journal calendar?) or chewing on something. I like role plays and skits.  I’ve tried and am good at such a wide range of sports and activities! And I’ve always loved playing games and figuring out puzzles. Even the act of writing seems like a Kinesthetic/Tactile activity! Of course I am a Kinesthetic/Tactile Learner!

What I don’t get it, is that with all of my athletic experience, I don’t see myself as having any special athletic talent, which is one of the characteristics of being Kinesthetic. There is always someone with stronger endurance or better skills or is faster than myself, so I don’t see myself as being particularly talented. How can I spend my life being as active as I have been and not see myself at least as a Kinesthetic learner? Why have I always downplayed that athletic side of myself? Just because I have tended to carry around an extra 10-25 pounds throughout much of my life means that I am not truly athletic or in good shape? Or it wasn’t cool to be a female jock while I was growing up, in the initial years after Title IX passed in 1972?

Back to “You Can Do This For Life”…

Last weekend, I spent Saturday in a training to become an indoor row coach with a UCanRow2 master coach. ROW (Recovery on Water), the fabulous rowing team for those impacted by breast cancer that I have been involved with the past 5 years, has relocated its indoor space and is taking this opportunity to give itself a makeover, making some shifts to things like its programming. As a result, an opportunity has opened up for a number of ROW team members to become indoor member coaches. As soon as I heard about this new possibility, I submitted an application. I have sat on every seat in a boat, including coxswain, as well as raced on the water and indoors on ‘ergs’–ergometer rowing machines as a ROW team member. The idea of merging together my love of ROW and rowing, my experience teaching and coaching swimming, and all of my experience in education itself, seemed like a great fusion of my skills. Being able to give back to ROW with my time, feels right.  Coaching a new demographic–my peers–is intriguing and becoming a better rower myself, while coaching others, is very appealing.

My application was accepted and so I found myself last Saturday training with 17 other women–a mixture of ROW Chicago members, ROW Peoria members and a couple of local erg rowers, unaffiliated with ROW. The program UCanRow2 believes that just about everyone can learn to row on an erg machine and benefit from this excellent fitness opportunity. Early in our day’s excellent program, our master coach, Katie, made note that erging is an activity “You Can Do For Life” and all I could think of was that set of golf clubs my parents gave me as a birthday gift 4 decades ago. I feel rowing and being a part of ROW–and yes, even erging, is truly a gift that keeps giving. I spent the day gaining new insights in to what it takes to coach rowing. I also spent the day thinking of how my enhanced awareness of learning styles and my new understanding of the importance of kinesthetic and tactile learning would play into my coaching.

Our one day of training did not create any instant coaches, but many of us are well on the way to becoming certified. I have some shadowing, a written test and a demo lesson to do, but last Saturday was a great kick-off. Besides hoping to row myself for the rest of my life, I hope being an erg coach becomes something I am inclined to do for a very long time.

A medal for improvement!

These pictures were taken 2 years ago at the 2018 Chicago Indoor Rowing Championships.