During my Peace Corps service in the Eastern Caribbean, I wrote at least one letter a week back to the States. Especially the first year, when everything was so new and different, I had plenty to write about. New people, new experiences, new food, new challenges. Truly good times–and some of the hardest. My parents were the most regular recipients of my letters and this correspondence morphed into a group letter over time, which I could make copies of at the Peace Corps office to send out ( just before email and definitely before social media). The responses I received back from family and friends were pretty awesome and I still have many of those letters. Maybe during this whole social isolation/shelter in place situation we are currently experiencing in many parts of the world, I will pull out my box of letters and see what kind of treasures I might find. In the meantime, I want to write an update of what is going on here in Chicago, in Peace Corps fashion, as I’m trying to process this unchartered reality we find ourselves in. I’m also hoping that it will encourage many of you to reply, letting me know how you are doing and what you are up to.

Last year’s Sprint for ROW was so much fun!!!!

So, last Saturday, the upheaval was just kicking off. Recovery on Water’s annual fundraiser, St. Pat’s Sprint for Recovery, had been canceled and so instead of being out on the Chicago River like I was last year, watching the river being dyed green, I was at home trying to find Perspective in the blog post I published. We had left school on Friday the 13th, having heard that Ohio had closed schools, but Illinois and Chicago had not. That changed after we all left, by 5:30, when we were informed that Chicago Public Schools–and any other school district not already closed–would be out for two weeks, starting on Tuesday, March 17, 2020. We were expected to go to school on Monday, March 16, with work for our students to complete during the shut down. Recognizing that many of my students do not have internet access at home, I had to be creative with those assignments of mine.

Looking back on this week, I feel that the hardest thing to wrap my head around has been the ‘unknownness’ of this whole thing. If everything shut down, would you still be able to go to the grocery store? Had I really stocked up enough to get by? Would the state’s school shutdown last only 2 weeks when other states and cities were starting to send out notices that their schools would be closed well in to April? Would we get paid? Would I be safe going to school on Monday being around students who probably wouldn’t show signs of illness? Could I be safe going to the grocery store? There was a drive-by shooting on Sunday near our condo, would we be safe outside walking our dogs as we enter spring and warmer temperatures? And what about that hot water tank that has 14+ years of use and started to show some serious signs that the end was near last weekend? And what about ROW? I’ve been working on my certification for coaching indoors for ROW, but with classes cancelled at ROW HQ, what would ROW programming look like during this strange time that we are in and where would I fit in? And how to gather information about what is going on without getting too overwhelmed?

So, most of this week’s unknowns have been resolved. I probably should not have gone to school on Monday, with my compromised immune system and history of teenage asthma, because rather than hand out work and let students watch a video like I had planned–all of us keeping decent social distance–my assistant principal showed up to my advisory class and I had to work one-on-one with a number of my freshmen students (85% of my freshmen attended school on Monday, while only about 30% of my seniors did) on their Chromebook computers to set up their College Board links to their Khan Academy accounts, because making sure our students can prepare for standardized testing and their use of Khan can be tracked is so all important even during a pandemic, rather than trying to calm my kids and distract them with a movie because they were totally off the chain. Whatever; such is life.

Our old hot water tank was a hot mess.

After a bit of drama, including a plumber bailing on installing a new hot water tank during a pandemic and Terry and I hauling our newly purchased 161 pound hot water tank up our 3 flights of stairs ourselves (I’m sure that was a sight for our neighbors!), we got a new hot water tank installed yesterday!!! Yeah!!!!!!!!!! Huge relief, let me tell you! Huge! Speaking of our neighborhood, so far so good with feeling secure when walking the dogs and moving around. It is taking time, but people are finally getting the message that sheltering in place is going to happen whether we want it to or not. The police presence in the neighborhood has been good and I feel confident that if things were to become really bad, the Illinois National Guard could be called in to deal with the situation. However, I don’t think it will come to that. Definitely hope not.

As of this evening at 5PM, the whole state of Illinois is under a stay at home order until at least April 7th and we found out on Thursday that schools will now be closed through April 20th. This puts some things ‘known’ into place and while totally unprecedented, it gives me the ability to plan and find some normality. Even though I made a store run on Tuesday where I felt confident we were covered for at least 2 weeks, I know that I will be able to go to the store when we are out of things and I can get my prescriptions filled. I know that Terry, since his business is growing lettuces and micro greens, will be able to go to work because it is considered an essential job. I know that I can get outside for exercise and to walk the dogs. I know that I am getting paid. I know that this week has turned out to be a good shakedown week where I’ve had time to take stock.

I also know that ROW–the leadership, the staff and the team–has shown amazing resiliency throughout this whole situation. Having to accept that there would not be a Sprint for ROW on the Chicago River this year for St. Patrick’s Day was only the beginning; indoor programming at ROW headquarters had to be suspended and we have been warned that the spring water season may end up being cancelled. However, the ROW staff has come up with a game plan to offer virtual options to help us stay connected and moving throughout this time of trouble.  ROW plans to offer coffee chat meet-ups and erg classes virtually and are lending out our team’s ergs to those of us that don’t have one at home. The ROW team member indoor coaches--the five of us newbies and KR, our veteran trailblazer–will be the ones leading these virtual erg classes starting on Monday night. If the Zoom meeting (my first) we had on Thursday is any indication, I think these classes will be fun and help us deal with this situation in a positive, supportive way. I am a little nervous, however!

So grateful to have a loaned erg in the condo! Now to find space to store it!

Other random notes from this week. My favorite social media post on FB had to have been a former colleague’s personal update done as a Star Trek commander. It was awesome! I’m averaging great conversations with family and friends at least once daily which has been huge. My extended family is all good at this point. I have definitely been cooking and so far I’ve made chicken pot pie, meatloaf, Swedish meatballs, pan seared salmon, and homemade pizza (yep, crust from scratch, too).  I’ve only caught a few, but was able to read some great blog pieces this week, including All I Need at Elizabeth’s My Eyes Are Up Here; How Stories Can Heal Our Wounded Places #WorldStorytellingDay at Marie’s Journeying Beyond Breast Cancer; Coronavirus 101 and A Message For Young People: Quit It And Stay Home at Brit’s Blooms and Bubbles; and Gossip at Abigail’s No Half Measures. Check them out! 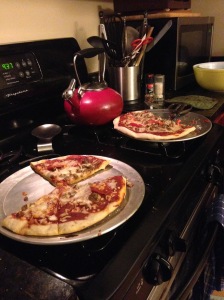 The pizza was pretty yummy!

I only teared up twice this week, which is great considering just how stressful it has been. Once was when our governor, J.B. Pritzker, today announced a Call to Action requesting help from retired doctors, nurses and other medical staff as Illinois COVID-19 cases hit 753 and a sixth person has died because of the virus. The other time was earlier in the week when I found out that Peace Corps is suspending its program and bringing all 7300 volunteers home. This one truly hits me on a visceral level for so many reasons. If you have time, please check out the National Peace Corps Association president Glenn Blumhorst’s Op Ed in the Chicago Tribune:

Commentary: Peace Corps evacuated all 7,300 of its volunteers due to coronavirus. They need immediate help.

For now, that covers things from my little corner of the world. What about yours? Sending support, virtual hugs, and well wishes to everyone.

6 thoughts on “Checking In”