One of the most brilliant pieces of advice I have ever received was given to me as a newly sworn in PCV by our Associate Peace Corps Director, Ms. Elnora Lake. Her advice? “Find Your Bridges.”

The 1992-3 school year had started and while I lived in the Antiguan village of Willikies, I taught at the Bethesda Post-Primary School, which was about 5 miles away and so I had to catch a ride on the old big yellow school bus, along with numerous students and a number of teachers. Did I mention there was no air conditioning or that the bus was usually packed with children who weren’t using deodorant regularly? Another story entirely. Anyway, when I would walk to the bus stop in the morning, there were a couple of boys who would give me attitude and I ended up feeling uncomfortable and threatened, trying not to make eye contact when I came upon them on the street and just walking past them without comment.   When I went to our weekly PC Language Arts Teacher meeting at Antigua’s PC Office and told my story, Elnora’s recommendation was to make friends as quickly as possible with someone local who could act as my translator and a guide in my new environment, someone to hold my hand. 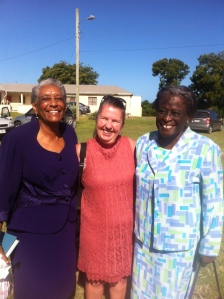 In my first month or two of living in Willikies, I had realized that guys bonded with one another playing football (soccer) or cricket, but women my age bonded at work or church. I was a curiosity and the kids in my village found me fascinating, but becoming friends with any of my neighbors who were close to me in age was going to take time.  So, I reached out to the hippest teacher at my school, Ms. Althea Chambers. 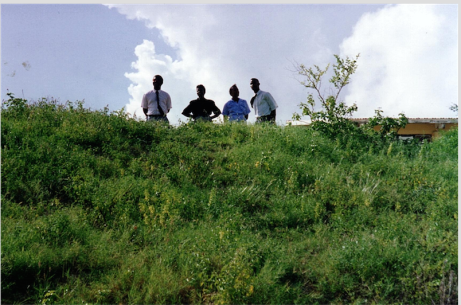 Our principal Mr. Josiah and teachers Ms. Chambers, Ms. Baltimore and Mr. Green watching a soccer game behind me.

She was probably about 10 years older than me and was only at our school until February of that school year, but in that short time she made quite the impression. She was energetic, opinionated and had already reached out to me. 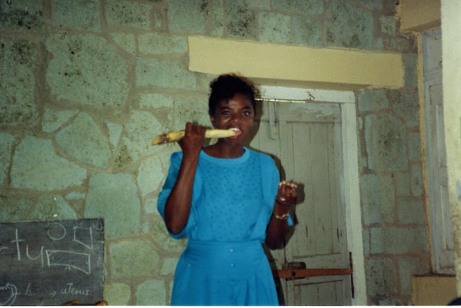 Guess who taught me to eat sugar cane as well?

When I told her about my situation, her recommendation was that I needed to get a back bone and when these boys started to give me attitude, I should look them directly in the eyes and calmly–but with strength and firmness–threaten to take them to the police. I did what Althea suggested–which was not the easiest thing considering I’m not generally the type to make waves–and wouldn’t you know it? Confronting those guys worked! When they gave me trouble, I looked the ring leader in the eyes and threatened to report them to the police. The look on his face! Priceless. And they didn’t trouble me ever again and were actually quite respectful.

That immediate success was all the positive reinforcement I needed so that I would take Elenora’s advice very much to heart and follow it over the years. When starting new jobs or moving to new places, I always look for at least one person who can act as my translator. As a Peace Corps Recruiter, Lora P. and Stephen I. at the PC Office in Detroit were my go-to folks with the mostest and when I transferred to Chicago, Grace H, Lolie C and Doug C helped me with the transition immeasurably. My dear old friend Elyse not only helped me transition in to my new life in Chicago, but also was my bridge when I moved to Los Angeles. Frankly, I must have some gypsy in me, because I’ve moved around quite a bit and when I remember back, I need to thank quite a few people: Eva at USC; my cousin Marilyn in LA; Tamiza, Mindy and Rachel and the rest of the LA RPCV community; Joe Cody at Harper HS back in Chicago; Rebecca, Adam, Militza and Kim in NOLA; and Abla & Reyna back in Chicago at a new school. These wonderful people have given me invaluable insight, validation for my struggles, and been amazing sounding boards.

This ability to look for bridges and key navigators has helped me immensely as I’ve ventured into the unknown world of healthcare this past decade. In Chicago, Danielle and Stacy were amazing physical therapists when I tore my ACL and they helped guide me through the process of surgery and recovery. Thanks to my colleague Kim’s recommendation of a primary care physician in NOLA, I was lucky enough to be in the care of the wonderful Dr. Garrett when I was diagnosed with breast cancer. Dr. Garrett hooked me up with not only a wonderful nurse navigator, Shawn N., who in turn pointed me in the direction of the amazing oncologist Dr. Gurtler, but also highly recommended the exceptional Dr. Uddo as my surgeon. Dr. Garrett also hooked me up with the awesome therapist Rebecca S. when I was struggling with some PTSD after my BC diagnosis, and Rebecca gave me the courage to start this blog, which has been a pretty amazing edition to my world and a bridge connecting me with a pretty amazing virtual community.

I could go on, but I really do need to wrap this post up! People, I’m trying to complete 2 26-post writing challenges this month! 🙂

But before I do, I want to thank Marie at Journeying Beyond Breast Cancer for being a bridge for so many of us with her weekly roundups and Joan for being my bridge to ROW. Thank you!

2 thoughts on “B is for Bridges”