Born in the Motor City.

If you are from Michigan–and definitely from the metropolitan Detroit area–you have car stories. Cars aren’t just transportation, they are a part of your identity and that of your family’s 20th century history.

From my Great-Grandmother Lucy Cooper Grey’s photo collection, circa the 1910s. Would love to know the story behind this photo!

Learning to drive is a right of passage (for both men and women) and while not always being too aware of it consciously, there is a big sense of pride with being from a city known for automobiles. Families claim loyalties to their car companies. My great-grandfather, Frank Segger, was an auto body repair man, worked many years for Buick and in turn, his cars were Buicks.

Not sure if this is a Buick, but this was Frank and his daughters Helen, Mary, Ann (my Grams), and Cora taken in 1924.

My brother-in-law’s father worked for GM and in turn all of their cars are GM cars. For years, General Dynamics was a part of Chrysler and so in turn, General Dynamic employees all drove Chrysler vehicles. My high school sweetheart’s father was an engineer for Ford and of course his family all drove Ford vehicles. It’s what you do.

You didn’t have to work for the car companies to be connected to automobiles. My Grandpa Cooper worked for the City of Detroit fixing parking meters and when street signs were changed from wood to metal, he collected the wood, building his basement staircase out of Schaeffer Highway signs. My dad was a drivers ed instructor for a number of years and has always put driving as a priority–he even had to give my 16-year old niece an unofficial driving test in August after her birthday to make sure he felt confident about her being on the road.

Being without my own car the past 2+ years has been a reminder of just how intertwined cars are to my story and identity. Buying a new (used) Subaru Crosstrek a couple of weeks ago still has me super, duper excited and ecstatic to have been given my freedom again!!!! It’s amazing!!!! I feel amazingly nimble, independent and agile again and love it!!!!

I’ve already taken it on a solo road trip back home to Detroit/Plymouth which was fantabulous and we used it to travel to Michigan’s Upper Peninsula for our Thanksgiving holiday with Terry’s family. It drives wonderfully!!! 🙂

It also has me remembering my first car(s).

My first car was technically one I shared with my sister.  However, since she was only 3 months old when we got this cool set of wheels from my grandparents, I think the gift was originally for me! 🙂 Loved this car! 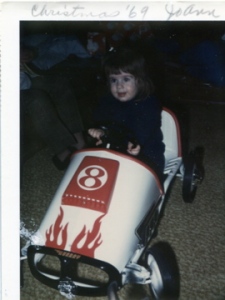 My first real car was a Datsun B210 that my parents bought for my sister and I to share–but again, she wouldn’t turn 16 for more than a year and so originally it was mine. They bought it from my Aunt Irene for $100 and with close to 100,000 miles, it was showing its age and required a summer of work.

I spent my sweet 16 summer learning to sand rust off of cars and do the Bondo work necessary to prep the car to be painted (Earl Scheib $99.99 special). With the help of my sister and our cousins, Jimmy and Chris, we got that car in shape.

It was truly a community effort. A friend of the family soldered in a new floorboard since the old one had rusted out (a number of holes were covered with pieces of carpeting). My cousin Todd put in a new stereo system and speaker system for us–complete with a tape deck! And my dad installed his ‘a-woo-ga’ horn so we had a bit of an old fashioned sound going on. 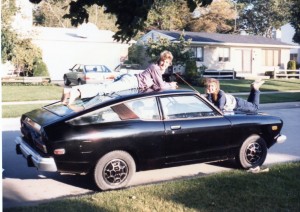 Loved that car! The Datsun, as we called it, was a perfect first car. We were forced to learn how to drive a manual/stick shift which has been a skill I have been grateful to know. For us suburban teenagers, the fact we didn’t have to ride the school bus my junior and senior years of high school was huge. The Datsun even offered me a way to get out of the dreaded weekly house cleaning chores: I was able to use it to do the family grocery shopping (which was a chore my mother hated to do).  It turned out to only give me limited wings, however. While we were driving home from the Cottage that summer when we did all of the work, the Datsun broke down and required being left in Clio, Michigan for repairs. As a result, after it was fixed, it didn’t travel long distances, but was still a great car to run around the Detroit suburbs with!

What’s crazy is that I was talking to a ROW friend, Jackie, at practice last month and we both realized that our first cars were green Datsun B210s!