I never visited New Orleans before moving here in 2009 and my only prior involvement with anything like Mardi Gras was a couple of Fat Tuesday dinners at New Orleans’ themed restaurants in Chicago and experiencing Antigua’s Carnival (which celebrates Emancipation). This means that my impression of Mardi Gras was limited to women baring their breasts for Mardi Gras beads on Bourbon Street as well as plenty of drunkeness and general debauchery. I’ve learned that there IS plenty of drinking and partying associated with Mardi Gras, but locals (and most visitors) never put out for beads or other ‘throws’ and locals are rarely found on Bourbon Street. Instead everyone gathers along the sidewalks and common grounds of the parade routes–streets like St. Charles and Canal for the the Uptown parades or Royal, Marigny and Decatur for the French Quarter/Marigny parades. I didn’t know that there were Mardi Gras parades and festivities in areas outlying New Orleans, in towns like Metarie, Covington and Slidell, or that towns and cities throughout the South, like Lafayette and Mobile, have long standing Mardi Gras festivities that rival NOLA.

I also thought that Mardi Gras was a one day affair. Was I wrong there! Mardi Gras is a Carnival season running from Epiphany/Festival of the Three Kings to the day before Ash Wednesday, known here as the actual Mardi Gras day. There really isn’t much going on, however, until Krewe du Vieux kicks off the first of three parade weekends–which it did the Saturday before last. Krewe du Vieux and Krewe Delusion travel through the French Quarter and the floats are either hand or mule pulled. Krewe du Vieux is actually known for being the first parade to march post-Katrina in 2006 and it known for being fun, but having an edge–it is a risque and satirical parade that takes on local and national topics with each of their floats. Krewe Delusion’s floats are similarly themed and both have some of the best brass and jazz bands marching and playing in the parade between floats.

Krewe du Vieux is one of my favorite parades and did not disappoint this year. Here are some pics… 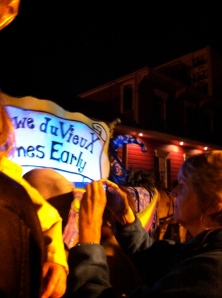 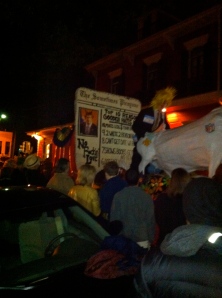 The Times Picayune made the unpopular decision to print the paper 3 times a week this past year. 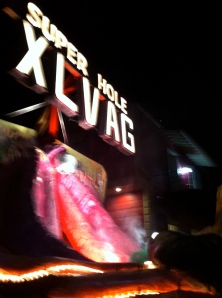 Not everyone is pleased with all of the money being spent on preparing the city for the Super Bowl.

And a great resource about all things Mardi Gras (history, parade route, etc.) can be found at http://www.mardigrasneworleans.com

3 thoughts on “MardiGras/SuperBowl/MardiGras 2013–Weekend One”