Celebrating a visit to Second Act last week, where I picked up a new batch of bras and a prosthesis, here is a post from January 2020.

Judy Blume was definitely a favorite writer of mine in Suburban Detroit during the 1970s and early 1980s and her words are part of the backdrop of my growing up. Books such as Forever, Blubber, Deenie, Superfudge, and Then Again, and Maybe I Won’t all helped me to navigate my youth and early teen years.  I actually remember trying the exercise suggested in Are You There, God? It’s Me, Margaret hoping to increase the size of my breasts. Of course, the exercise wasn’t going to determine the actual outcome of my cup size, but I sure thought it might help, as did many of my peers. This quick video of Judy Blume demonstrating her technique is classic.

Irregardless of my efforts, I ended up with decent-sized breasts and for nearly three decades, I considered my C-cup sized breasts to be one of my top physical assets. I wasn’t afraid to show a little cleavage with my outfits or while wearing bikinis, however, I wasn’t one to bare all.

I loved lacy, sexy bras and lingerie and enjoyed how they could give me confidence, adding to my spark. Victoria’s Secret was definitely a favorite store of mine, even if their pink interior decor was never a favorite color.

But having a mastectomy at 43, half-way through our New Orleans experience, changed things drastically. A simple exercise was not going to increase my missing breast.

Aside from Mardi Gras and hosting, I did make time on Friday to be fitted for a breast form/prosthesis. Now that was an experience. So, in Louisiana, most insurance companies and Medicare cover 3 mastectomy bras a year and 1 breast form/prosthesis every other year. Where does one go to get fitted or to order these contraptions? Macy’s? Kohls? Victoria Secret? Oh, no, contrare. It appears one goes to the Local Home Health Supply Store. Nothing against those places, they serve a purpose. However, I did not appreciate sitting next to an older man while I was filling out my initial insurance paperwork who was on a rant about euthanasia needing to be legalized in Louisiana because he is tired of all of his medical issues and just wants someone to end his life!!! Hello, this was not my idea of going bra/breast prosthesis shopping. Granted there was a nice private room once the fitting started and the sales woman was extremely enlightening, but come on! If I’m going bra shopping, I’m not going to be browsing in the blood glucose meter, wound bandage or walking cane sections of the store after I’ve been fitted!

That first experience of being fitted for a prosthesis and the matching mastectomy bras nearly traumatized me permanently. It didn’t–although there has definitely been some PTSD! It didn’t help that my fitting brought me from a size ‘C’ bra to a ‘B’ bra which added insult to injury with all that was going on in adjusting to my mastectomy. I wasn’t really happy with the results, but it sure seemed like it was my issue. I had bras and a prosthesis that seemed to work, time to move on?

However, that first experience put me on a mission to find something that worked better for me–because that whole experience surely didn’t. It also inspired me to look at ways to create something different in New Orleans.

So began a quest.

In 2012, during that first summer post mastectomy, while on my vacation travels, I stopped at two different boutiques that specialized in meeting the needs of women dealing with cancer: That Special Woman in Toledo and Second Act in Chicago. Neither location had bed pans or any of the other gadgets associated with a home health store, which was very appreciated. That Special Woman was a bustling store (in an old school doctors/dentist office building) with multiple fitters and a broad assortment of bras, breast forms, bathing suits and wigs–and angel figurines.  Second Act was a small office space in a larger building dedicated to self care and health businesses run by a solo fitter/owner who carried bras, breast forms and wigs. Everyone that I met was respectful, kind and helpful.

However, it seemed that all of my fitters were focused on the crater left by the mastectomy rather than my beautiful remaining breast and making sure my bras fit both sides. The idea was that the bras should be snug because you don’t want the breast form popping out and also, they will stretch out, so they won’t feel tight long. I ended up walking away from the boutiques with a couple of new bras that I bought because I didn’t want to walk away empty handed from the experience. However, they weren’t comfortable and they still didn’t help me feel that certain confidence I used to find from a sexy bra. And I never wore them.

Life moved forward and the following year (2013) I went back to the home health store to be fitted for new bras that my insurance would cover (at the time, a prosthesis was ok’d only every other year). Another woman helped me this time and we were able to find a couple of bras that I liked which were comfortable and not too frumpy. But around the same time, I started to be given Ortho Depot injections which created its own set of issues and so life moved forward again.

In early 2014, while attending my monthly support group, we had a guest speaker from the department store, Dillards. This woman was a bra fitter with lots of experience and she made it clear that if a bra was fitted properly–even without a pocket sewn in–that your prosthesis should stay in place. This realization was significant to me. She also offered her services for fittings, even if our insurance wouldn’t cover an order from a department store. I walked out of that meeting feeling that I had just experienced a definite ‘ah-ha’ moment and suddenly excited about it being time for a new prosthesis and bras. I went to see her for a fitting before we moved back to Chicago and nearly cried when she informed me that not only was I not a B, but I was actually a D cup size. What a difference those letters make!!!! Huge. I was able to take my new knowledge to a different home health store in New Orleans to place an order that would be covered by insurance and this store ended up being awesome, as well. I was able to get the new prosthesis that Dillards had fitted me for as well as new bras that were more than satisfactory.

During the 12 months that would become my sabbatical when we moved back to Chicago, not only did I do a lot of caregiving, but I also looked into new opportunities other than teaching. One of those was taking a series of SCORE classes geared to starting a small business. SCORE, a nonprofit organization, is dedicated to helping small businesses get off the ground, grow and achieve their goals through education and mentorship. The small business I explored starting? A women’s intimates boutique for those dealing with cancer and other medical issues.

While I did explore that new direction, and gained a lot of insight into starting small businesses, life happened and I haven’t pursued this idea further.

And each year that we have been back from New Orleans, I have gotten a new prescription for bras and a breast form from one of my doctors and checked with each new medical insurance policy to see what is covered and researched which department stores do mastectomy form measurements and sew pockets into properly fitted bras. And each year there has been some reason not to fulfill those scripts.

Remember those bras and that prosthesis that I got before we left New Orleans? They have ended up serving me well. Until last year. Let’s put it this way, a breast prosthesis is not designed to last more than 2 years and no matter how tight your new mastectomy bras start out, they become pretty worn out and pathetic with constant use. I started to notice that whenever I could, I would go bra-less–because it was more comfortable. I also started to notice that I was starting to slump my shoulders like a teenage girl that is uncomfortable with her body and feel especially frumpy.

On December 26th, I finally had 6 hours to myself at home without any distractions and caught up with a ton of calls and paperwork and other miscellaneous tasks that needed my attention. Calling our medical insurance to get the specifics of coverage was one of those calls. Once I found out that Nordstrom’s is not considered a provider, but Second Act is, I also called both to schedule fittings and was able to book a slot at Nordstrom’s on Monday, December 30th and Second Act on Tuesday, December 31st.

Wow. My fitting at Nordstrom’s and the bras my wonderfully perceptive fitter had me try on had me feeling a way I haven’t felt in probably 8 or 9 years about lingerie. There was an immediate “aww shucks, I’m kinda cute” factor when I looked in the mirror that I haven’t felt in a long while. My slumping shoulders straightened and I found myself loving the look and feel of the bras. For the first time since I had my mastectomy, I felt that my beautiful left breast was the focus of our attention and that once she was happy, we focused on creating symmetry with the correct sized breast form. I bought 3 non-mastectomy bras–one was a D, another was DD or E, and the third was a DDD or F–and was like an impatient kid when I found out the bras, with pockets sewn in, wouldn’t be ready for pick up until the 9th! 🙂

However, with my Nordstrom’s measurements in hand, I was off the next day to Second Act for my fitting there. Second Act moved locations a few years ago and the new space is awesome! Pattie worked with me to find a similar prosthesis to the one I had tried on at Nordstrom’s, as well as 3 mastectomy bras. Filling out the insurance paperwork was effortless–especially compared to that first experience of mine 8 years ago! Such a relief to leave New Year’s Eve afternoon with 3 new bras and a new breast form in hand!!! Finally.

I picked up my 3 bras from Nordstrom’s on Saturday and I am absolutely loving my options!!!!! 6 bras???? Crazy, but so much fun. My slump is retreating. I find I that I am walking straighter and have a spunk that has been missing. 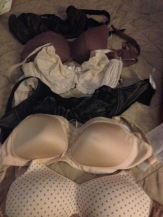 Seems that I might have found a way to get some of my sexy back.

3 thoughts on “Getting A Little Sexy Back”