I’ve spent 7 years of my life so far living in areas that have plenty of experience dealing with multiple high and low intensity hurricanes. I lived on the island of Antigua from 1992-1994, one of the Leeward Islands of the Caribbean, a northeastern part of the Lesser Antilles chain, which has experienced numerous hurricanes and tropical storms over the years, including Hurricane Dog (an intense Category 4 or 5 depending on whose criteria you are using) in September 1950 and Hurricane Luis (a Category 4 storm) in early September 1995. 15 years later, I ended up living in New Orleans with my husband, less than 4 years after Hurricane Katrina.

Living in these two locations, hurricane awareness is simply a way of life, as are the stories. Notices about hurricane season preparedness begin way before the season kicks off in June, weather forecasts are prepped and ready to go into hurricane watch mode with a quick pivot, and there are plenty of opportunities to share past experiences with one another (in line at the grocery store, in a class assignment, while meeting new people for dinner).

I realized recently that the first semester of the 2020-21 school year was so intense, that it was as if I was experiencing a major hurricane in my life.

The funny thing about hurricanes is that often there are earlier storms in a season that do lower level damage, but you don’t realize those storms have left you vulnerable. It wasn’t easy peasy, but I felt like I navigated the early weeks and months of the new COVID reality really well. I mainly stayed close to home except for weekly trips to the store; learned how to teach using Google Meets and Zoom; walked the dogs; journaled and blogged; and embraced ROW’s virtual programming by coaching and attending all kinds of fun classes and activities like yoga, healthy nutrition, book club, and bingo. With Terry pouring all of his energy into blowing out his hydroponics farming business, I also accepted the responsibilities of keeping the home front managed. I was busy, but time felt manageable for the most part. And we kept thinking that quarantine would only last a week or two before we would return to normal–and then just another week or two, and so on…

For me, life continued to feel manageable through the first half of summer vacation (the first I had been able to embrace in 6 or 7 years), when I could take care of the home front (including walking the dogs), work on projects that I had neglected, continue my coaching and involvement with ROW, support Terry with his endeavors (and emotional meltdowns when the stress of what he is trying to do would get too much), and attend workshops, professional developments, book talks, etc. that either interested me or helped me make sense of all that was going on in the world. Those first 5 months were where my experience with COVID felt like I was experiencing a set of tropical storms. They were disruptive, but manageable.

One of the most challenging things with regards to hurricane planning, is that it is extremely random as to where a direct hit will occur. There are plenty of maps and projections, areas that have a ‘history’ of being vulnerable, and simulations of what might happen if a hurricane does occur in certain areas, but it is all random. It was random that the area around Lake Charles, Louisiana took two direct hits this past fall and that the 2020 season was so active. It was random when Hurricane Luis hit Antigua in 1995 and that the extensive storm damage destroyed such buildings as my classroom, but had little or no impact on other areas of the island. It was random that my first year living in a hurricane zone, 1992, Hurricane Andrew totally bypassed the Lesser Antilles and instead lambasted Florida and other parts of the US.

Here are a couple of pictures of my classroom from when I taught on Antigua: 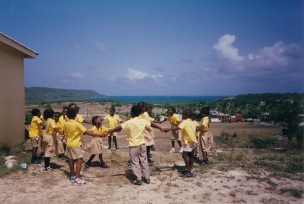 And here are the remnants of my classroom, from when Terry and I visited in 2017:

It has been just as random as to who is impacted most directly by COVID and when it will most impact our own individual lives.

For me, August brought a different weather pattern. The Chicago Public Schools Board of Education–in the midst of an increased spike in COVID numbers–decided that returning to school buildings was a good thing. The Union and teachers fought back and CPS had to back off returning everyone to buildings. There were lots of union town hall meetings and bulletins sent out to read which between that and the emotional weight of not having a clear plan in place, made for very unsettled times and a brewing storm. The last week of August was our district’s teacher professional development–all virtual–which gave a glimpse of what was coming–we weren’t prepared for what was coming our way. It was as if the barometer and other weather indicators had dipped and were giving off serious warning signals.

When the first semester of this school year officially began the Tuesday after Labor Day, with students returning virtually, it felt that the new school year came barreling into my life, unrelenting in all it asked of me.

Our 2 week winter break became my eye of the hurricane and a much needed respite before January resumed the chaos.

Teaching Civics and US History during the 2020 US election cycle–including on my birthday, January 6th, the day of the insurrection on the US Capital and the Inauguration. Exploring and learning new ways to teach my classes, including researching and reflecting on how to teach about race and anti-racism, abolition, and the interconnectedness of force and freedom. Coordinating the completion of graduation requirements unique to my classes (Service Learning Projects for my Civics students and the Constitution Exam for my US History students) for 159 students on top of their regular 1st Semester grades. Having the CPS Board of Education wanting to have the first waves of teachers and students return to school for March–and the Union and teachers fighting back for a viable safety plan because we know how unsafe and under-resourced our schools are despite COVID and a union vote resulting in that first wave of K-5 students returning to school buildings March 1st. My role as our school’s Service Learning Coach. Trying to keep a positive spin on all of this, focusing on our resilience, as we persevered during this super trying semester.

Oh, and of course there was that thing called a personal life to attend to in the midst of all of this.  Zora was diagnosed with vestibular disease (old dog disease) just as the new school year started and with my being the home front manager, caring for her became even more intense and high maintenance than it had been previously. I tried to continue coaching my weekly ROW classes, but taking a hiatus October thru December became imperative. There were my regularly scheduled doctor’s appointments, mommy time jaunts to the grocery store, a couple of rounds of golf, and a trip to the UP before COVID numbers started to rise. There were awesome Zoom calls and reunions with my friends, family, and former Peace Corps peeps, and plenty of TV/Netflix/Amazon time (rather than reading, because with TV you can multitask). Lots and lots of walks with the dogs. Unique celebrations of the holidays and birthdays.

Then there was the fact that I somehow managed to write 26 blog posts–26!!!!!!!!–during this crazy semester. Wow.

Hurricanes, like crazy first semester’s of a COVID school year, require some time to process. I thought I could excitedly proclaim It’s a COVID Wrap! and simply move on from my crazy first semester of this school year. However, I didn’t realize that physically and emotionally, I still had work to do and that there was still plenty of clean up that needed to happen. The semester ended on February 4th and this past month has felt like I’ve been cleaning up and processing a really intense experience. Organizing paperwork, taking care of unfinished business, completing and distributing 3 rounds of King Cake, and writing this blog piece have all been part of the process.

I’ve remembered that we ended up in NOLA–nearly 4 years after Hurricane Katrina and the flooding caused because of the broken levees–because Terry got a job that was funded by a rebuilding grant. My first job in NOLA was working as an assistant archivist with The Tulane Recovery Project helping to process and re-organize the extensive collections of Tulane University that were swamped because of Katrina flooding. I remember noticing buildings being left abandoned that would end up being rebuilt at a later point throughout the whole time we were there. Rebuilding is still taking place today, more than 15 years later!

I also remember how sometimes the hurricane damage leads to rebuilding that was better than before. Because of the damage caused on Antigua by Hurricane Dog and another hurricane during the 1950 hurricane season, the homes and buildings that were rebuilt were stronger than they had been before. Antigua even had a big 1950s era movie theater built for the residents of the island–which we enjoyed 40 years later.

COVID has definitely created havoc in the world, but it has also had its silver linings. And we are definitely going to be cleaning up, processing, and rebuilding for years when the crisis of COVID Season runs its course.

Now it is back to living in the general Hurricane Season of COVID, where my life is recovering from the hurricane of first semester–and staying ready for another hurricane that might be popping up as discussions start regarding high school teachers and students returning to in person learning.

And a quick postscript about the reason I got to experience living in a hurricane zone in the first place:

One thought on “Clean Up In Aisle 6!”