I had goals going into this year. To read. To write. To see and reconnect with people.

In January and February, I was on track. I didn’t read my 8 ‘a-book-week’ books; but I read 4, as well as lots of articles and blog posts written by others. I did manage to jump into writing and pressed ‘share’ on 9 blog posts, which felt really good. And I did reconnect with some really special people which was awesome! I met up with 3 of my former Peace Corps Chicago colleagues over Martin Luther King weekend–Lolie here in Chicago and Grace and Carol for a much needed Girls Weekend in Washington, DC–which was fantabulous. I also was able to meet up with one of my favourite former teaching colleagues, Reyna–on a school night!–which was super cool. Terry and I also were able to attend one of his sister’s weddings in Michigan in February which meant we were able to connect with his family, which is always special.

I had goals going into the COVID lockdown. To read. To write. To reconnect with people. To be a Virtual Teacher of the Year. To rock it as a ROW coach. To work on the projects that have been nagging at me for awhile.

Hmmmm…well, I definitely read, but not the book a week I set for myself at the beginning of the year. I did, however, read lots and lots of articles and blog posts of others and social media posts of family and friends. I started strong with projects when we finally replaced our hot water tank the first week of sheltering in place, but really didn’t dig in to the list very far.

I definitely wasn’t a super star teacher, but I did the best job that I could, learned a ton in a very short time, and adapted to our new virtual reality. I showed up every day, supported my students during a most crazy time, attended lots of meetings, and held on as our framework and expectations seemed to change daily. I didn’t quite rock it like I had imagined as a ROW coach either, since coaching virtually is a whole other entity than coaching in person, but like teaching, I did the best I could and showed up each week to coach my weekly class. I also showed up to the classes of my teammate coaches to not only give support and get in a great workout, but to learn helpful tricks. ROW was actually leading the way with adapting instruction to our new virtual reality and so I was able to transfer what I was learning while coaching to my remote teaching practice.

Connecting with people hasn’t quite been what I had in mind at the onset of all this. I thought I would have time and energy to reach out and connect with many more people than I did and experience reconnections daily–or at least weekly. Using Zoom with ROW gave me the comfort to connect to people virtually and that was essential to my interaction with others, but between teaching, walking Bleu and Zora at least 3 times per day, supporting Terry’s business buildup, and involvement with ROW the first couple of months of lockdown, I hardly made a dent in the list I created of people I wanted to reconnect with during the early weeks of COVID. I did reconnect with a number of people who weren’t on my list, however, and I found that Peace Corps reunions–even with virtual limitations–are amazing! I also was able to maintain connections with special people in my world like family and good friends and avoided feeling isolated. I actually attribute much of the limited feelings of isolation to walking the dogs outside so much and my involvement with ROW. Thanks to my planner data, I know that I was involved in 13 (7 virtual) ROW-related events/classes/gatherings in March (which last year would have been close to normal), 33 (all virtual) in April, 31 in May, and 23 in June! Many of us were definitely leaning into the ROW community during this crazy time!

I did manage to write during the first 4 months of lockdown and in my 14 posts with Searching For EMWA, I was able to document my experience and make some sense of this crazy COVID reality, as well as feel less isolated.  A challenge, made by a special friend during the early days of going remote, truly reset my 2020 trajectory, however. In researching for my post What Are Your Go To Online History Resources? , at my other blog, A Home for the Family Tree, I found myself re-embracing my background and experience as a public historian.

When your good friend Patti, who you served in Peace Corps with more than two decades ago and who knows many of your secrets, posts a note on Facebook asking what “your go to online history resources” are, you respond. Granted, considering we have been in the midst of the COVID-19 Pandemic for nearly 2 months here in Chicago, I wasn’t able to easily pivot and put this piece together; however if your world has been anything like mine, we are not going anywhere in a hurry right now and so letting a post like this simmer a bit, is just fine. It doesn’t hurt, either, that the sites I originally had on my list have stepped up their virtual offerings since our country began to shelter in place and so I had to explore these renovations and updates.

While some of my closest geek friends growing up were really into dinosaurs or model trains, I think I was always a big fan of history. Reading Laura Ingalls Wilder and the Little House on the Prairie series, Louisa May Alcott’s Little Women, and biographies of people like Helen Keller, important leaders, and people who had persevered through adversity; listening to the story tellers in my world such as my parents, grandparents and our extended family; and visiting museums like Northern Michigan’s Fort Mackinac and the Detroit area’s Henry Ford Museum and Greenfield Village are all important memories of my childhood.

Check out the rest of this post by clicking here: Online History Resources?

By doing the research and writing about history resources, I started reclaiming my perception of myself as a public historian and found myself re-engaged in the focused study of history. I attended more than 20 Zoom/WebEx/Google Meets webinars/seminars/talks March-June related to history topics and was fascinated by all of the different speakers and sessions–and how the whole process had pivoted into this new virtual reality–which I could attend while sitting on our comfy couch or desk chair.

I had goals going into my first true summer vacation in more than 5 years. To read. To write. To connect with people. To be as engaged with ROW as much as possible. To work on the projects that have been nagging at me for awhile. To regroup. To rest. To play.

I didn’t expect to be sooooooooooooooooooooooo tired when summer vacation started. I was truly exhausted when it began June 23rd, but it wasn’t just because of the insane school year–although it could have been. Considering I was teaching at a new school with a rookie administration; teaching a subject I hadn’t taught in 9 or 10 years; that we had a two-week strike thrown in at a very crucial time in the school year; that COVID invaded our lives; and that the lives of Black people would be such a prominent focus, it was definitely a unique and intense school year. However, I believe I started this break feeling so wiped out because of just how intense and high maintenance life has been since we moved back from New Orleans 6 years ago. There has been continuous change and motion–with plenty of loss–in our world to navigate and there sure hasn’t been time to just ‘be’ or to regroup from it all before something new has emerged.

This summer of being physically distant has actually allowed me to tread water or float for a bit. While my Type A side wanted me to just deal and get on with my life by accomplishing stuff (like working on some writing projects I want to delve into or reaching out to everyone on my list that I want to reconnect with or catching up on my beginning of the year reading goal or upping my exercise routine), my Type B side had other plans. I’ve read a little. I’ve written a little. I’ve connected with people a little. I’ve been involved with ROW a little (comparatively!). I’ve played a little. And I’ve attended quality history programming a little.

But what I have done a lot of is rest, regroup, and work on some of those projects, instead. One of those projects has been to clean through 5 or 6 years worth of our household paperwork and the feeling of satisfaction has been tremendous! I know where things are again. Woo hoo! One cool bonus is that since we came back from our trip to the UP, I’ve listened to 4 books on CD while doing the big purge/re-org!

Our ROW social director with the mostest, Elaine, scheduled a ROW Show and Tell event this afternoon where each of us was to share something from our COVID experience. It was so much fun to see what everyone has been up to and decided to share with the group. Gardening, disciplined art practice, yummy food tips, helpful reading suggestions, and a number of home improvement and organization projects were all included.

I decided to share the coolest thing that I have found during my 2020 household paperwork purge. In the midst of my papers, was a set of 6 small looseleaf papers with my handwritten notes. These found notes–along with a photograph and some other documents–actually belong to one of my most meaningful college experiences.

I attended Northern Michigan University, located in Marquette, Michigan, way up in the Upper Peninsula of Michigan. Marquette was a medium sized town and during the late 80s/early 90s it was in a very isolated part of the world, which meant that Northern had to put a concerted effort in to funding student activities and opportunities. I actually spent a year as the editor/primary writer for the Student Activities Office newsletter and was a founding member of the campus group Platform Personalities which sought to fill the lecture void on campus. We hosted speakers such as Yolanda King and Elie Wiesel and a debate between G Gordon Libby and Abbey Hoffman, but the speaker that really impressed me the most was Makakiwe “Maki” Mandela. This was the late-1980s and Maki was a graduate student at UMass-Amhearst. She was on a speaking tour–and I had the honor of being her chauffeur. I learned so much about the world during her visit and was truly blown away that Maki was so ‘normal’ and on a similar page. Her father was famous and still in prison and yet she had to get permission from him to attend university in the United States. I remember her being so kind and diplomatic and someone who sought common ground with others. I’m really not all that surprised that I have tried to do the same. 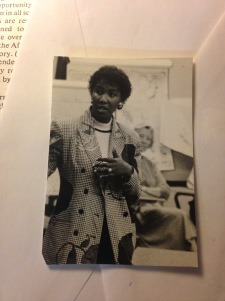 What new activity have you picked up during the Pandemic? What are you most proud of accomplishing? Have you discovered any hidden treasures?

7 thoughts on “Show and Tell”