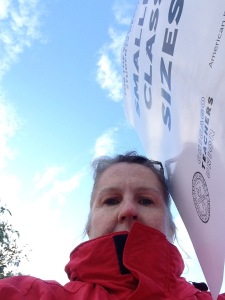 I thought I would spend this October reflecting and writing about my 8th Breast Cancer Awareness Month since I was diagnosed. I had a couple of posts mocked up to write and thought I would make the time to finish the pieces.

When I returned to Chicago Public Schools in late August, I knew full well that we might strike, but I really didn’t think it would happen.

However, I knew when I returned to CPS, I was committed to whatever direction we were heading and would be ready to fight if necessary.

When we, the members of the Chicago Teachers Union, voted last month to authorize a strike (94% in favor), I hoped that a strike wouldn’t be necessary–even though the mayor’s office had not been concerned with negotiating a new contract for 8 or 9 months prior.

Two weeks ago, I thought that if we ended up going on strike on October 17th, we would only be out of our classrooms for a couple of days. Come on, who wants students out for any extended length of time on their watch–especially when certain campaign promises were made? What about sports and college apps and college recommendation letters? What about our STUDENTS???

Two weeks later, we have spent 9 days on strike.

Going in to October, I didn’t realize how much a strike could take over my world or that there would be similarities to how much my breast cancer diagnosis nearly 8 years ago redirected so much of my energy.

Frankly, I didn’t realize just how many similarities there would be.

I didn’t realize just how mentally and physically exhausting spending at least 4 hours a day on the strike line could be–just like I didn’t realize how overwhelming a cancer diagnosis is when it invades your world or how time consuming and exhausting all of the medical appointments and treatments can be.

I didn’t realize how crucial it was to be able to advocate for yourself–and others. 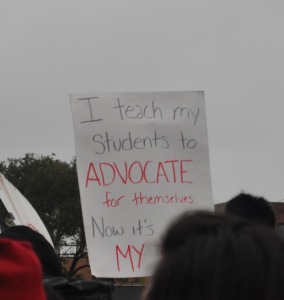 I teach my students to advocate for themselves. Now it’s my turn.

Or how being on strike is like being in treatment: you focus so much energy on keeping up to date on the latest information. Instead of Doctor Google and your other resources, you are keeping posted on all of the latest news, press releases, and union messages.

I didn’t realize how somedays just showing up could be so hard. But you do. Regardless of nasty weather or yucky treatments or aching joints (thanks Tamoxifen!) or feeling generally frustrated, you still show up and persevere.

I also didn’t realize that the politics of striking could get so complicated–like I didn’t understand how complicated the world of being a breast cancer patient and survivor can be.

Everyone has an opinion. There are many similarities between the priorities of education and healthcare in the US and how both are funded–and there are some major issues around both in regards to equity and fairness. I didn’t realize that insurance could be used as a bargaining chip in negotiations…yep, we are looking at losing our insurance coverage if this goes beyond Halloween as a scare tactic. Nothing like a little bit of panic on that front. 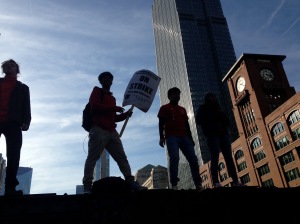 I often lean to the side of being a ‘right fighter’. When do you compromise for the greater good? When will the progress our negotiators have made be enough? Who advocates for those without voice? My students are crammed into classes of 37 and we don’t have a librarian to tend to our school’s library. We don’t have a dedicated nurse or social worker at my school. Am I not supposed to do something about that with the voice I have or should I just stay quiet? I often see the pinking of October for corporate financial gain and know those who are struggling with metastatic breast cancer whose voices and concerns aren’t shared. Should I just stay quiet and not fuss?

But I also didn’t realize that there is a bit of a silver lining in all of this. I didn’t recognize the solidarity and connectedness I would find striking, like I didn’t expect to find the special relationships I have been so lucky to build within the cancer community (the blogosphere and Recovery on Water community quickly come to mind :-)). I didn’t realize how key my support network would be during the strike, just like I didn’t realize how important that support would be when I was diagnosed. Community building is what it is all about, folks! From walking the line by our schools each day with my new colleagues, marching throughout Chicago and reconnecting with former colleagues (including my sister-in-law! :-)), or getting support from my social media network as well as strangers, is so similar to my experiences these first 8 years being an active participant in the cancer community.

And if you happen to wear red, think of us here in Chicago, and support your local teachers.

3 thoughts on “The Struggle is Real”