On October 14, 1960, after a day of campaigning in the 1960 presidential election, Senator John F. Kennedy arrived at the University of Michigan in Ann Arbor to head to bed, not to make a speech. However, close to 10,000 students were waiting for the candidate to speak at the steps of the Michigan Union and so he acquiesced with a speech that lasted less than 5 minutes. In it, the idea of Peace Corps was first publicly introduced.

“How many of you who are going to be doctors, are willing to spend your days in Ghana? Technicians or engineers, how many of you are willing to work in the Foreign Service and spend your lives traveling around the world? On your willingness to do that, not merely to serve one year or two years in the service, but on your willingness to contribute part of your life to this country, I think will depend the answer whether a free society can compete. I think it can! And I think Americans are willing to contribute. But the effort must be far greater than we have ever made in the past.

The first time I consciously heard about Peace Corps, I was in a political science class my second or third year, attending the remote Northern Michigan University in Marquette, Michigan. When a Peace Corps Recruiter spoke to our class, I remember looking over to my friend Rob and telling him that I could see myself being a Peace Corps Volunteer, while Rob was a definite no. A couple of years later, when my history professor and advisor, Dr. Jon Saari, suggested that I join Peace Corps after graduating from college, I took him very seriously.

I applied to Peace Corps, using the typewriter my grandparents gave me to type my application. I had a phone interview during the summer of 1991, sitting in the front room at the Cottage, interviewing with a recruiter who hadn’t noticed in my paperwork that I was a secondary education major with certification and expressed interest in teaching English–at a time when English teachers were a hot commodity. I was heading to Eastern Europe/a former Soviet country when the medical staff realized that my asthma would disqualify me from serving in a post in that area because of the pollution and cold weather. I got my actual assignment while ski bumming the winter in Keystone, Colorado where I had taken off on an adventure–and was substitute teaching.

And We Are Off!

We were called EC58 and there were around 60 of us in our group, heading ultimately to different islands including Antigua, Grenada, St. Kitts & Nevis, Union Island, St. Vincent and St. Lucia. We started our service on July 12, 1992, meeting in Miami for what is called Staging, spending two days making introductions, getting shots and preparing to leave the country. Such an interesting, diverse mix of people in our group, from all over the US.

We flew from Miami to St. Lucia for 6 weeks of what is called Pre-Service Training and I remember sitting next to a Cuban businessman who gave me his version of Castro and the Cuban Revolution during our direct flight. I sure didn’t know Fidel Castro had attended Harvard and played decent baseball. 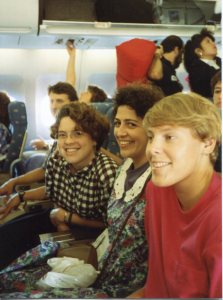 When we arrived at the Hewanorra International Airport, Peace Corps Volunteers and Staff welcomed us with signs. 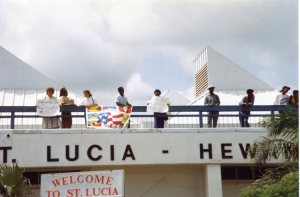 We loaded onto large buses with all of our 80 pounds of luggage (each) and drove into the capital city of Castries to meet our homestay families.

We stayed with Homestay Families during our 6 weeks on St. Lucia and mine were spent with the wonderful couple, Mr. and Mrs. Steele, and two members of their extended family. I had a bedroom to myself and was included in many of the family’s activities.

We had training sessions Monday thru Friday, giving us not only a chance to train for our programs, get a start on learning local dialects or patois, and learn about the ins and outs of local culture, but also bond with the rest of the volunteers in EC 58. This meant we would have new friends to visit and stay with when we island hopped on vacations and for workshops during our service. Great times, but it sure was hot!

After 6 weeks of Pre-Service Training, we headed off to our separate islands for another couple of weeks of more island specific training, meeting the ‘seasoned’ volunteers who had already served a year, living with another family of homestays, meeting our counterparts, exploring the island and finding living situations for ourselves.

We wrapped up this period with a formal swearing in ceremony. 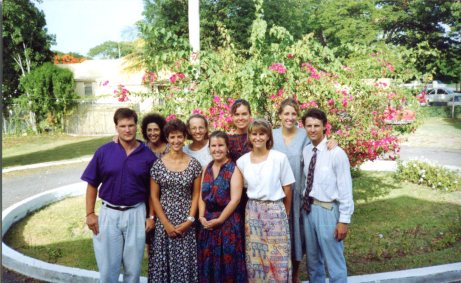 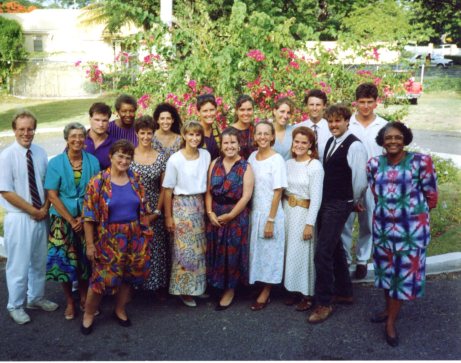 There we were, officially Peace Corps Volunteers!!!!!

And, I really do need to move beyond the first 4 months of service with my next PC post!

4 thoughts on “Sometimes It Starts With An Impromptu Speech”