On my way back to New Orleans this summer, I made a quick stop in western Kentucky. I wanted to visit the cemetery where my grandparents are buried and check on the little town where my grandparents retired and where we used to visit when I was a kid. It was the first time I had stopped since moving to New Orleans, the first time since we buried my grandmother a decade ago. 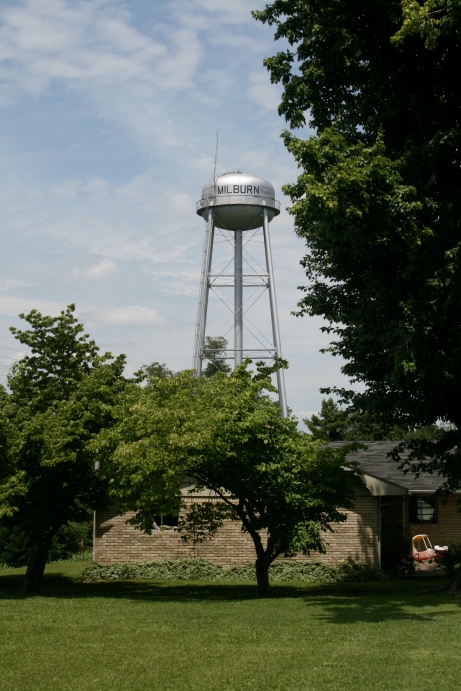 Something magical happened during this short detour: I was able to visit with the widow of my grandfather’s cousin, who my sister and I called, Aunt Rita. 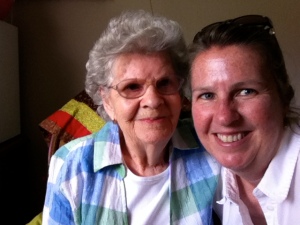 The truly amazing thing is that Aunt Rita was 99 years and 11 months old when I stopped and has since turned 100 at the end of August. 100 years young! And she is still amazing!! Legally blind and a little hard of hearing, she is still her energetic, vivacious, loving self. I’ve never personally known anyone who is 100 years old. 3 or 4 of my great-grandparents lived into their late 80s/early 90s, but no one in my immediate family has hit the century mark. I can’t think of any centurions in my ancestry research either.

Visiting Aunt Rita took me on a trip down memory lane to a rather innocent time in my life. When my dad’s parents moved to Kentucky, we would visit my grandparents for a week during the summer and they would come North to visit at Christmas. My grandparents lived at the top of a hill and Aunt Rita and Uncle Stout lived at the bottom. My grandparents had a large garden, a big finished garage (where my snoring grandfather would sleep in this early version of a man cave) and a nice porch in front of their mobile home with a comfy glider. Aunt Rita and Uncle Stout’s home had beautiful gardens, a goldfish pond and a big kitchen where Barb and I would play marbles and Old Maid with my grandmother and Aunt Rita. During our Kentucky visits, we would go fishing, ride horses (& ponies), pick huge Kentucky blackberries and visit Civil War Memorials at the point where the Mississippi and Ohio Rivers converged. Aunt Rita and Uncle Stout are very much a part of these memories.

Back to Aunt Rita. This vivacious Canadian woman met Uncle Stout while he was in the Service during WWII, stationed in Nova Scotia. Talking to her in August, she downplayed their romance, even though there were a number of pictures of Uncle Stout in her room. She must have fallen for something, because he was able to persuade her to return to Kentucky with him after the war, leaving her family and home to start a new life in the US. She told me a story of how she excelled at her citizenship test back in the 1940s–and at the assisted living home she lives in today, she finds it amusing that she knows more about American civics and history then most of the other residents. Aunt Rita and Uncle Stout never had children of their own, but she has always loved kids and animals–which was very evident with how she treated my sister’s kids during our last visit to Kentucky in 2003 and she treated our dogs during my August visit–especially our troublesome boy Bleu.

Ms. Rita never got her driver’s license–even though my driver ed instructing father tried to teach her in her 60s–but she worked at the tiny one room post office in Milburn which was only a short walk from their home.  I remember Barb and I would walk with our grandmother to visit.

Much has changed since we visited Milburn in the 1970s and 80s. The post office is closed and so is the general store where men (including Aunt Rita’s brother-in-law, Tommy) would sit out front on the ‘gossip bench.’ Aunt Rita and Uncle Stout’s home is still occupied, but my grandparents’ mobile home is no longer standing. The garage is still there and so is the foundation, but apparently the guy that owns the property is in “The Pen” (as in penitentiary). I was able to walk around the property which I found surprisingly nostalgic.  A restaurant built in the 1990s is still open and I was able to grab lunch there, which included a yummy piece of blackberry cobbler. Milburn remains a peaceful, friendly place.

Aunt Rita still travels and has a sister living in Nova Scotia that she visits each year. She appreciates and sees the magic in the little things in life, from socializing with her neighbors and weekly visits with relatives to being chosen as the 2013 Queen (think Homecoming Queen) of her assisted living facility. 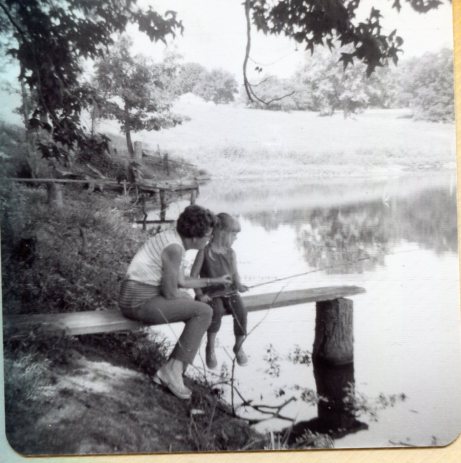